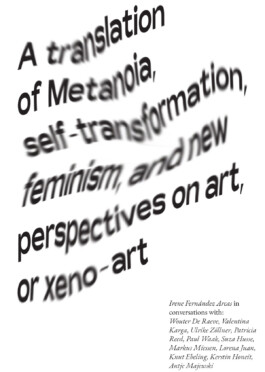 A translation of metanoia, self-transformation, feminism and new perspectives on art or Xeno-art

Irene Fernández Arcas in conversation with:Wouter De Raeve, Antje Majewski, Knut Ebeling, Patricia Reed, Paul Waak, Ulrike Zölner, Suza Husse...
This project is a compilation of conversations with artists, architects, writers, curators, philosophers. The research and series of dialogues was conceptualised by myself (Irene Fernández Arcas) and realised in the context of my theoretical final paper for the graduation in Painting at 'Kunsthochschule' Berlin Weissensee, for Knut Ebeling's colloquium.

It is a sketch, an unfinished experiment, a laboratory in motion, an attempt to decipher and represent some ideas from philosophy and theory. Whereas theoretical works vaunted by the academy can often seem hermetic, exclusionary, I want the gesture here to be the opposite. This book is, hopefully, as approachable as the people I spoke to were.

Together with these people we discussed: metanoia, self transformation, xeno- and xenofeminism, finding new perspectives on art, and a possible new term idea: 'xeno-art'.

Dialogue as thinking. As exploration. As a form of reading or studying or writing. Dialogue as community building, as a relationship, as a way to subtly - or dramatically - alter who we are and how we understand the world. For these and many other reasons, my research was made using conversation. That the final product is a book, is perhaps a contradiction. But this book should be understood as the starting point for an ongoing sequence of works and talks, giving a curatorial framework for a (maybe) relational art project. I did not know at the beginning of this process where I wanted to go, what the theoretical goal is. I surrendered to the dialogue, drifted with the flow of the process.